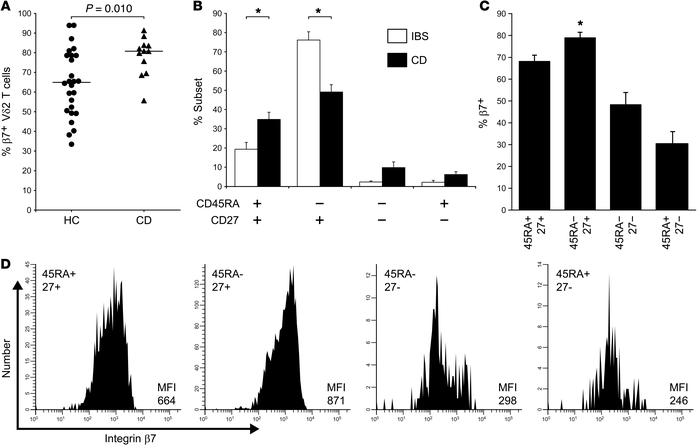 () In patients with moderately active CD about to receive de novo AZA therapy ( = 12), flow-cytometric analysis of blood lymphocytes revealed a significant increase in the proportion of β7+ gut-homing cells within the CD3+ Vδ2 T cell population when compared with healthy controls ( = 26). () In a separate analysis of pediatric CD patients (mean age 13 years), we observed that the overall proportion of β7+ Vδ2 T cells in blood was comparable with adult CD patients (NS, not shown), but the CD45RA–CD27+ subset was selectively depleted compared with sex/age/ethnicity-matched IBS controls (* < 0.001; = 8 per group), while the subset distribution of conventional αβ T cells as defined by these markers was unaltered in CD (data not shown). () The CD27+ population of circulating Vδ2 T cells expressed significantly higher levels of β7 integrin than did any other Vδ2 T cell subset (* < 0.05; = 8), consistent with increased trafficking of these cells to the gut and a corresponding depletion from the blood in CD. () Example histograms showing integrin β7 expression levels in the different Vδ2 T cell subsets detected in blood from an IBS control (representative of = 8). Significant differences between groups were determined by Mann-Whitney rank-sum test (), or repeated-measures ANOVA ( and ).